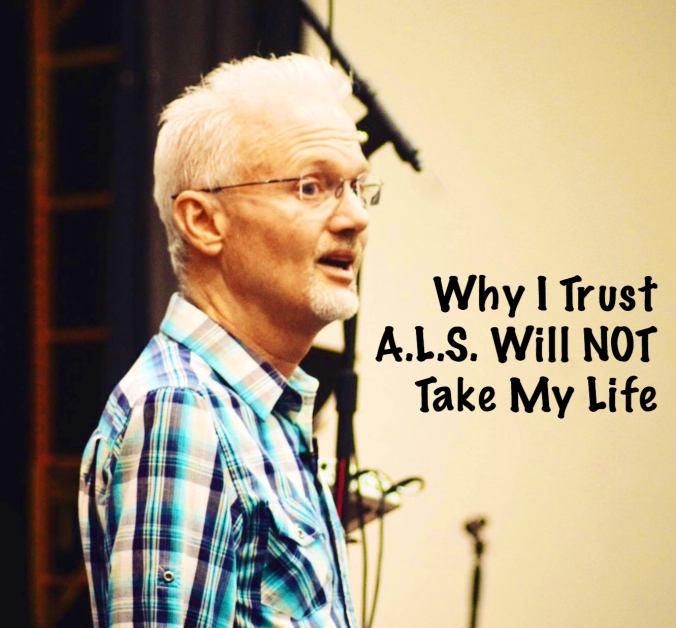 Why I Trust A.L.S. Will NOT Take My Life (It’s kind of long but please read all of it…you will be encouraged.)

I’ve been reading in Romans chapter 4 about Abraham and the PROMISE God gave to him……something I have read hundreds of times. As I was reading the other day, nothing really jumped off the page at me, but I was encouraged by the faith of Abraham. Then, only minutes later…..

…….as I was in silence (in the bathroom) the Lord asked me, “How did I give the promise to Abraham?” I was puzzled. I didn’t think there were any written Scriptures at that time so I replied, “I guess You spoke Your promise to Abraham.” He told me that’s exactly how He did it. He also said that Abraham not only believed the promise but he also had to believe the SPOKEN WORDS PROMISED were actually from Him.

THEN God asked me, “Have I ever given YOU a promise through the words I speak?” My quick reply was YES. When me and Pastor Al went to Africa in 1988, I was in my hotel room looking out the window. I was day-dreaming about me preaching the Gospel around the world. I asked God, “When can I do this?” He very clearly said, “Isaiah 55:4-5.” I immediately dug my Bible out of my luggage to see what these verses said……”I made him a witness to people, a leader and a commander for people. And now I’m doing it to you: You’ll summon nations you’ve never heard of, and nations who’ve never heard of you will come running to you; Because of me, your GOD, because The Holy of Israel has honored you.” (GW, MSG)

God asked me, “Has that promise been fulfilled yet? Are you a witness to people, a leader, and a commander for the people?” My response was, “I feel like I am a witness and I believe I’m a leader…..but I know I have NOT become a commander yet.” (Commander means: to constitute, enjoin, to appoint, command, give orders, lay charge, give charge to, set in order) GOD said, “Then YOU don’t have anything to worry about do you? Until the ENTIRE promise that I gave you is completely fulfilled, your main consideration is to TRUST ME like Abraham trusted Me.”

The revelation I received from this is……. God’s promises, whether they are found in the written Word of the Bible or they are “heard” by the Spirit of God personally, they are both promises that He is responsible for and He will fulfill them….His way! Our responsibility is to believe and TRUST IN HIM to do it.

A seasoned Christian usually has no problem believing a promise in the Bible. However, when we personally HEAR a promise from God there can be doubts that arise during rough times; which makes us “hope” it was God that spoke to us. God quickly erased that thought telling me there’s no difference between the written Word and His spoken Word. The written Word was not penned by God Himself. It was penned by human beings as HE inspired every Word to be written. So, we have to TRUST those written Words we read in the Bible to be God’s Inspired Words. Likewise, we have to TRUST that the spoken Word we received from God is indeed from God. It all comes down to faith and trust.

We must note that Abraham’s faith was CONFIDENCE in a PERSON. The OBJECT of faith, is that which really matters more than anything else. Abraham’s faith was not decided because of its strength or lack of it, but because its object was God. So, like Abraham, my faith is IN GOD. I have dared to trust God to do what only God can do: raise the dead to life, and with a word make something out of nothing. Though everything looks hopeless, I believe anyway, deciding to live NOT on the basis of what I cannot do, but on what God said HE WOULD DO. (Romans 4:17-18) AMEN!

In Him,
Pastor Kevin Kinchen